I was at Objectifs the other day for Chin Hon’s book launch and saw the Lomo cameras on sale there. How cute. I got the cheap yellow disposable one. It was nice to use film after a long long time, which to me just means I have no idea what kind of pictures I am taking.

In the end, I ended up taking lots of pictures of my nostrils. Tip: those fancy colour effects only show up when you take something close-up (like nose holes) in a dark dark place.

I simply could not bear to use my brains this weekend and so I spent most of my time cutting, sticking, punching bits of pretty paper, stickers and photographs. There’s something about the sound of (good quality) paper being cut, getting your fingers sticky with the glue and being surrounding by shiny stickers. The world just seems like a much nicer and fuzzier place when there’s good stationery.

I realise scrapbooking and me will go very well together since I generally  like pretty paper (Paper House stalker), sparkly pens (Popular bookshop/Kino stalker) and photographs (too many of them all over the house). I felt so soothed after completing my very first scrapbook that, I went down again to the money-sucking scrapbook shop to pick up more delightful designy papers and alphabet stickers. I am making it a point NOT to go for a scrapbooking class because I know it gets really complicated with iron-ons and embroidery and heat embossing – which my lack of artistic aptitude (and wallet) would not be able to afford.

For now, I’m just happy to just to get crafty instead of worky. Now I understand why high-strung Paris Geller from Gilmore Girls had set up a scrapbooking table at her Yale dorm to find inner calm. It does work!

In order to prevent being stir-crazy in this tiny island, one has to move constantly within its small spaces. There are numerous widely-contrasting (albeit tiny) places that thankfully give one a sense of well, space. Having been a little tired of the space I was kicking my feet around in of late, I made my bi-annual pilgrammage to Pulau Ubin and found some refuge in Chek Jawa, possibly the tiniest mupltiple-eco system I have ever seen.

Pulau Ubin is a lot more crowded now and the jetty feels more like a cycling festival rather than an abandoned village (which is what I originally liked about it). But it still has that nostalgic 1980s aura, where it is ok to have dirty food and mud in your shoes, and catching the biggest fish means that your weekend is made.

At some point, I will have have to talk about Recent Possessions Acquired. People like to talk about New Toys, or New Food at New Restaurants or New Clothes – I guess, with nothing much more to life than work and spending the money made from work, Buying New Things becomes a Big Deal. 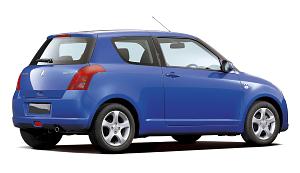 About a month back, we got a Suzuki Swift Sport (which I think qualifies in the New Toy department) in a darker shade of blue and I suspect, an earlier model too (all small cars look alike to me). We call her Patsy (since the van is called Patrick). I scratched Patsy within the first week of trying to get acquainted with driving again. I have forgotten how to park and I don’t think I have any natural aptitude in that area too. But once I get that down right, I will attempt to be Independent Cruiser.

Patsy is supposed to help me get over this fear I’ve had of driving since that time way back in 1999 when I first drove out of Ubi Driving School and met LORRIES, and TRUCKS and BOORISH CABS that were generally rude and territorial. Coupled with seedy, creaky moustached 50-something driving instructors with permed hair, I generally HATED driving. I kind of gave up, until I took it up again in Melbourne which was absolutely a breeze with empty, wide suburb roads and basically an infinite amount of space and time given to park, since well, no one was around.

I am ok with: relatively empty highways, country roads and totally empty carparks

I am not ok with: practically anywhere else which is meant to be a city where it is crowded with LORRIES, TRUCKS and BOORISH CABS and SNEAKY MOTORBIKES and CROWDED CARPARKS.

But this is where Patsy comes in – she is small to make parking a little easier but not small enough to be bullied (apparently ). She is Auto which means Any Idiot (including me, apparently) Can Drive This.

At this point come the lame excuses why I have so many issues about driving. Firstly, I got into two pretty bad car accidents when I was younger (a fractured collarbone and a badly-sprained wrist respectively), both time sitting in friends’ mums’ cars. My psycho motor skills are genetically predisposed to be lacking and I have difficulties telling left from right and what the concept of straight is. My sister cannot park like me too and my mum has never parked straight in her life and has also knocked an old man down before (but he just got a bruise fortunately). So really I am a psychologically-damaged dyslexic when it comes to driving.

However, I will never forget a Portuguese bongo player I met who “read my stars” using a sophisticated astrology programme from his laptop and duly informed me that I would be ABSOLUTELY MISERABLE if I do not have a car to “explore the ends of the world”.

So Patsy (and reluctant, blood-pressure-ever-rising Instructor D.), do bear with me.

This is sounding too much like an old scratchy record that cannot go beyond a certain track.

But I am tired.

There will be a little reprieve soon.

But I am so tired.

After the little complaint about the censored short story, author Wena Poon dropped an e-mail suggesting that I check out the rest of her short stories in their (untouched) entirety. I managed to get a copy from the library and read this book through the week. For some strange reason, it provided a little reprieve from the very localised issues I was facing at work. Perhaps because the characters were all displaced (but in a familiar sort of way) which in turn took me out of my present situation. Two stories I liked:

“The Man Who Was Afraid of ATMs” reminds me of all the pictures of rosy-cheeked mum’s friend’s children in bright checkered blazers that were sent back. With a tinge of envy, my mum would show me these glossy photographs, and sometimes even prop them up on the hall mantel. In particular, Sharon from Toronto’s pictures were a big favourite, because this kid just radiated with pure joy. I’ve learned over the years that my mum’s greatest regret was not staying longer in London, and as such I only have one set of blazer-adorned studio photos, which she hates because my nose looks too flat (“I just want to keep pinching it.”) I’m glad for this other side of the immigrant story with this unassimilated ATM grandpa character, which I realised is an issue many of my overseas friends hardly ever talk about.

“The Shooting Ranch” was a rather dark tale of a Singaporean family in Nevada. One line which made my heart break a little: “I just wanted to get married to a Singaporean Christian man and settle down and have a simple life.” Many Christian women hunt down Christian men because of religious compatibility (and implicitly, eternal happiness), but at the end of the day, it’s still a human you are marrying. This human has choices and sometimes, the choices will hardly be holy. Disturbingly enough, the anti-Western father antagonist reminded me of a group of Hwa Chong boys who wanted to beat up my male classmates after my female classmates said something sarcastic to them at some sports events in junior college. Apparently, that group hated “outspoken banana females”.

There are eleven stories in all for this collection, all very readable and authentic (from the point of view that there are no flowers, phoenixes and other overtly oriental symbols). I like the neutral, observational tone throughout this collection of stories, which is refreshing since most local literature can get quite angsty. Actually, I am a little unsure whether this is truly “local” literature, but it is a great read for anyone who is a) Singaporean and living abroad b) Singaporean and wanting to live abroad c) Singaporean and has lived abroad for a certain number of years. 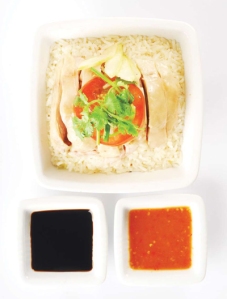 While attending the opening ceremony of the Singapore Food Festival, I met an old friend whose friends were a bunch of food bloggers who were just so hardworking about reviewing the dishes and making sure all their pictures turned out pretty. I guess I should do a little local promotion here too. This year’s festival focus is on “Top Ten Must-Try Local Dishes” – all in the good cause of promoting heritage and tourism. (I am bugged by “Must-Try”, just like how I am bugged by “Can-Do” and “Win-Win”) Here’s a recollection of my favourite dish of the lot: Chicken Rice, brought to you by those lovely culinary-inclined migrants from Hainan Island.